From Chicken to Cheesecake: A Poetic Journey Through Dinner

86 Logic publishes fiction, poetry, interviews, and visual art from people who previously or currently work in the restaurant and hospitality industry. For seven years, I worked behind the scenes from the assistant manager to the food and beverage cashiers, to income controller, and finally as a food and beverage controller.

I was delighted to find a literary journal who honored that work by limiting submissions to those of us in that business. I was further delighted to have my poem accepted by the editors, Zach Whitman, Mike Ferrin, and Kate Meadows.

If you had worked in the hospitality venue at some point, here’s a link to their submissions page: https://86logic.com/pages/submit

If you’d like to read the most current issue as a sampling of what they like, please consider pre-ordering Issue 6 here: http://linktr.ee/86Logic

Thank you! And bon appétit!

Lot for Sale. No Pigs Chapbook Available from BatCat Press! 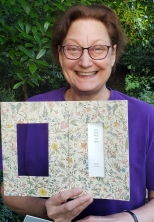 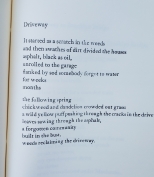 Curious about how the relationships among you and your neighbors, strangers in the neighborhood, friends, and family affect your life? You think they don’t? Read on.

My chapbook – Lot for Sale. No Pigs – is intended for readers interested about what goes on in other peoples lives. How alike, weird, or likely weird are we?

Lot for Sale. No Pigs was produced in cooperation with Lincoln Park Performing Arts Charter School in Midland, Pennsylvania. The printing was handset and then hand-fed on an American Printing Machines press. Lots of hand-work and care went into each copy, and I’m very pleased and grateful to Deanna Baringer, Bailey, and the other student editors for choosing my work and showcasing it in such a creative manner.

The book can be purchased from BatCat Press.

Celebrating Perseverance in the Writing Community

Today I am happy to be part of Writers Persevere!, an event that authors Angela Ackerman and Becca Puglisi are running for the next few days to celebrate their release of their newest book, The Emotional Wound Thesaurus: A Writer’s Guide to Psychological Trauma. This book looks at the difficult experiences embedded in our character’s backstory which will shape their motivation and behavior afterward.

Because Angela and Becca have spent the last year exploring painful human struggles, they wanted to highlight a very important aspect of overcoming difficult circumstances: it can make us stronger. I promised to let Angela hijack my blog today, so please read on!

Hi everyone! When you set out to find examples of inner strength, you don’t have to go very far. Right here in the writing community we see it every day. Writers more than anyone understand the swirl of emotions as we work toward publication. We dream of making it and seeing our books in the hands of readers…yet doubt and frustration can be a constant companion. For us, there is a lot to learn, much to steel our nerves for, and unfortunately, a host of real-world problems that can try to derail us. And, even as we slowly move forward and grow, we can sometimes feel like impostors. This is a tough road.

But the fact that writers face this battle, day after day, and KEEP GOING…this should be celebrated! We need to be reminded that we are much stronger than we sometimes believe. We dream, create, and force ourselves to keep striving. Through the ups and downs, we persevere!

Have you encountered something on the writing road that made you question yourself? Have you faced an obstacle that required a force of will to get past?

If so, we want to hear about it! Join Becca and me at Writers Helping Writers from October 25-27th, where we are celebrating writers and their stories of perseverance. Stop in, and tell us about a challenge or struggle your faced, or if you like, join this event by writing a post on your own blog and share it using the hashtag #writerspersevere. Let’s fill social media with your strength and let other writers know that it’s okay to question and have doubts but we shouldn’t let that stop us.

We also have a prize vault filled with items that can give your writing career a boost, so stop by Writers Helping Writers. I would love for one of you to win something that will help you get closer to your goal!

If you struggle, remember to reach out to others. We are in this together, and by supporting one another, we cross the finish line together (and then keep going!).

Dice apples and mix with sugar. Let stand one hour. Add remaining ingredients. Bake in a tube pan sprayed with non-stick cooking spray at 325 degrees for 1 1/2 hours. Cool in pan ten minutes and remove to wire rack to finish cooling.

Check out the details here: http://tinyurl.com/z7e9rsc

Agent Natalie Lakosil critiqued my first page on Kathy Temean’s blog! I’m so appreciative of the feed back! Natalie is an agent at the Bradford Literary Agency. An honors graduate of the University of San Diego, California, Natalie holds a B.A. in Literature/Writing. After nearly four years at the Sandra Dijkstra Literary Agency and a brief dabble in writing author profiles and book reviews for the San Diego Union Tribune, Natalie joined the Bradford Agency in February of 2011.

Natalie is drawn to talented, hard-working new authors with a fresh, unique voice and hook. Her specialties are children’s literature (from picture book through teen and New Adult), romance (contemporary and historical), cozy mystery/crime, upmarket women’s/general fiction and select children’s nonfiction. Her interests include historical, multi-cultural, magical realism, sci-fi/fantasy, gritty, thrilling and darker contemporary novels, middle grade with heart, and short, quirky or character-driven picture books. She is always drawn to an open and positive attitude in an author, professionalism, good grammar, and fantastical, beautifully…

Twofer Tuesday – Through a Lit Window: Back to School Quotes 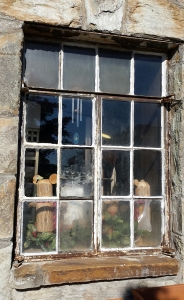 The back to school season has begun! Whether it’s off to kindergarten, college, or beyond, here are two quotes to remind us the learning never ends.

“Education is not the filling of a pail, but the lighting of a fire.”  ~ Plutarch

“The whole purpose of education is to turn mirrors into windows.”  ~ Sydney J. Harris

How to Cope with Naked Soap

This unusual wire basket I bought in an antique store in Cape May, NJ practically begged to be filled with something pretty and fitting for the powder room. Paper wrapped handmade soaps were a good choice, but a little pricey. I opted to buy a ten-pack of Ivory Soap for $3.99 at Target and cover the bars of soap with scraps from my fabric stash. Here’s how I did it:

Looks cute. You’ll never run out of soap, unless you can’t bear to unwrap them!

An Interview with the Consistently Considerate Author Asher Roth 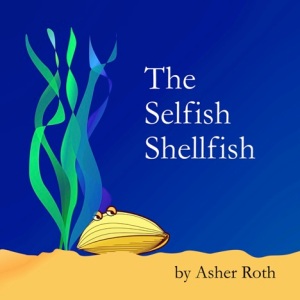 I met Asher Roth at a recent author book signing at The Cascades branch of the Loudon County libraries where he entertained patrons with his delightful picture book, The Selfish Shellfish.

Over the past three decades, he has served as the creative director at a Baltimore-based advertising firm, worked as a writer and video producer for private companies and government agencies around Washington DC, and managed media production for a large corporation.

He currently works as an independent video producer in Northern Virginia and resides in Loudon County with his wife, Kathy, and their three children.

That’s an interesting question, particularly since I both wrote and illustrated The Selfish Shellfish. I enjoy imagining my stories during long strolls and while I’m in the shower, but neither one is conducive to writing, much less drawing! For writing, I like to compose and polish my prose at my desktop PC in my “creative sanctum” in the basement of my home.

Regarding illustration, I create much of the imagery in my mind’s eye as I’m writing at my computer, and I often grab a piece of typing paper to roughly sketch out an idea, in order to better organize the image. I prefer an open and well-lit area for more detailed sketches — I used to have a portable drafting board for this purpose. However, over the years I have become more digitally-inclined, and now I do most of my illustration work on the desktop.

I love being able to take an abstract thought and craft it in a medium that conveys this thought to others. I love watching the responses of people, young and old, as they read and look at my story. While I value their comments once they have finished reading the book, it’s their expressions and reactions during the actual read that are the most revealing, and gratifying.

For me, the most difficult part of writing a children’s story is working out the “kinks” in the rhyme and meter, so that it becomes fluid for most readers. We all stress words differently in sentences, and finding the best phrasing that allows for these variances is a challenge. In terms of illustration — drawing has always come fairly easily for me, though I am not a fast illustrator… it can take me days to complete a single panel. So, I suppose the easiest part is envisioning and initially composing the work, and the hardest part is crafting it into a finished book.

I love photography… composing pictures of people, places, animals and flowers — in fact, 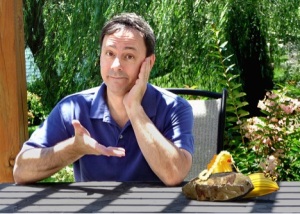 anything and everything that is both aesthetically pleasing and revealing. I feel that every moment has a story to tell, and the reward is in its telling. Whether it’s a family reunion, a pensive individual, a couple sharing a laugh, a commanding vista, a sunlit forest, a caterpillar traversing a leaf, the contours in the bark of a tree, a weathered and abandoned shack… it doesn’t matter: There’s a story there, and I endeavor to capture at least a part of that story.

That’s a tough one! I don’t know if I can have a particularly perfect day… there are so many options! If I manage to accomplish something that is both personally fulfilling and enhances the lives of those around me, then that’s pretty close to perfect. Oh — and a caramel-almond ice cream torte with hot fudge sauce after dinner would be nice!

Nope. That’s one thing I try to avoid. Filling word quotas and meeting deadlines are required for journalists, but I consider creative writing to be based on inspiration rather than quantity and timetables. However, writing is a craft, and craftsmanship improves with practice — so I do endeavor to write every day… just not on a schedule!

I had always imagined The Selfish Shellfish as the first book in a trilogy, each one touching on some aspect of personal attitudes and social interaction. Next up is a story about a rather unsociable millipede named Millie, who doesn’t care much for kindness and manners — until she sees this behavior from the other side and realizes how much nicer it is to be nice. Here’s a mockup of the possible cover art: 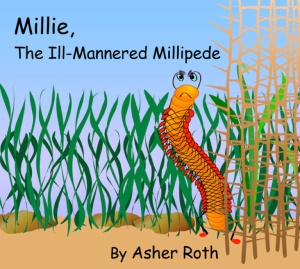 Thanks, Asher,  for a polite peek into your writing world!

For more information, readers can reach Asher at: Mr.Asher.Roth@gmail.com, or visit the Amazon website for The Selfish Shellfish, read reviews, and look inside the cover at: http://www.amazon.com/Selfish-Shellfish-Asher-Roth/dp/1500977810/ref=sr_1_1?s=books&ie=UTF8&qid=1418586094&sr=1-1

No One’s Watching is a year old and forever young! Enjoy the story of ballerina turned Irish dancer in this teen read! 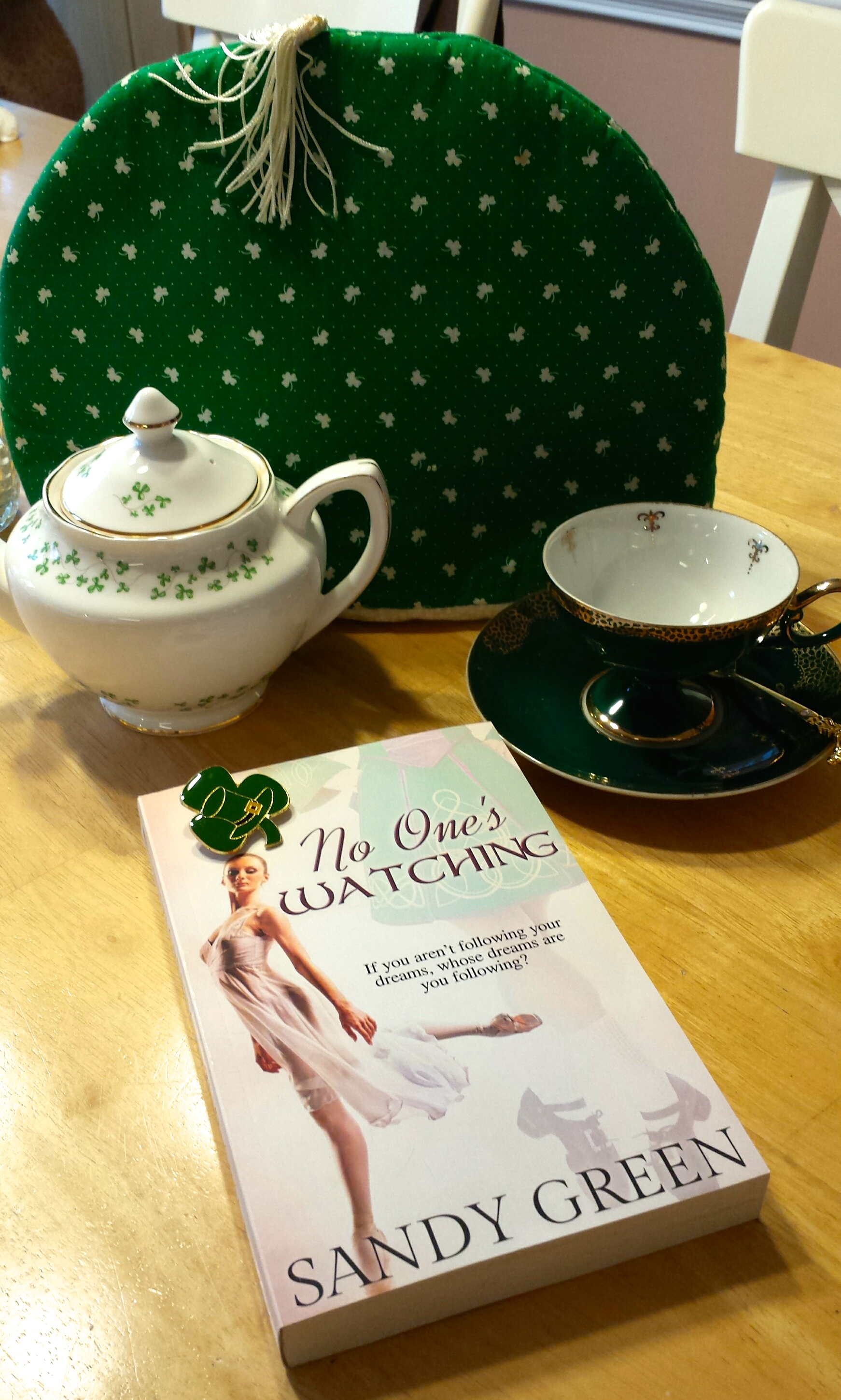